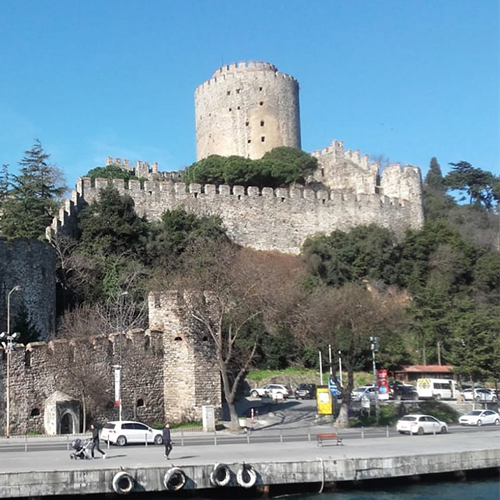 The illusion of respectability that Fusun’s marriage offers her is too flimsy and the charade the whole family keeps up, is every moment exposed.  Aunt Nesbit acts as if Kemal is a distant wealthy cousin who visits them because he is deferential , so paying respects to elderly relatives. Fusun behaves as if they were mere acquaintances, with nothing much in common. Kemal too tries to act casual and friendly when her father puts on a proper show of hospitality.

Kemal’s hopes are shattered when the truth hits him that his beloved now belongs to another, but he feels deeply insulted, when he realizes that they had invited him so that he, the rich relative could fund Feridun’s dream of making a film.  He tries to keep away from the Keskin residence but he cannot and returns on the pretext of discussing Feridun’s dream project.  The three of them go to cinemas in the evening and dine out in the restaurants overlooking the Bosphorous. Kemal it seems now needs nothing but the closeness to Fusun that he experiences on these visits.

“One evening, when I had placated the djinns of love and found peace in Yani’s Place, just by sitting across at Fusun, I recall being struck by the simple ineluctable formula: Happiness means being close to the one you love, that’s all”

When I tried to replicate the events in the novel, walking by places Kemal wandered through in search of Fusun or eating at a similar place, I suppressed the desire to scream in glee. I discovered a patisserie which sold Fusun’s favourite water pastries and smiled from ear to ear at the shop boy who handed me the box of sweetmeats. He smiled back shyly.

Once I ordered a zucchini sandwich in a restaurant where the chef spoke 6 languages. As in every shop, restaurant or street corner there was a lovely Turkish cat here too. The chef cum owner told me her name was Zaida. At first, she sat waiting by my chair, polite and proper. I tried feeding her and the cool disdain on the feline’s countenance changed to a kind of friendly smirk. She put her paws on my lap and begged. The chef laughed and called out to her, “Zeyda I am warning you, don’t paw my customer” But I loved her and did not want to be another Sybil.

The novel is a clever literary production not only because it links itself to a visual/physical space and enriches the illusion of the world presented in the story, but also because it interweaves without hiccups, the personal, the cultural, the economic, and the political in the course of this emotionally draining love story.  When Kemal pockets a soda bottle from which Fusun had drunk, as keepsake, (which later finds its way to the Museum) the author seamlessly starts a discussion of how industries and businesses took a downward plunge: the brand Meltem soda, its success as a popular drink and the adulterated stuff that passed off as genuine stuff. Thereby, giving the reader a clear picture of market economies in Istanbul of the seventies along with intense world of Kemal and his beloved Fusun.

Pamuk also has a discussion of the film industry going in the narrative. There is no tripping over words, even though here Kemal is reflecting on his need to be with Fusun on some pretext or the other, watching films or discussing scripts. It is the author’s dexterity in building up a story, that we marvel at when he starts an elaborate discussion of films released during the 70s in the novel, inviting the reader into the world of Turkish films and culture (as much as into Kemal’s love- sick heart.)

During the summer of 1976 we dined together at many Bosphorous restaurants. Even years later, every time I looked out at the Bosphorous through the windows of those restaurants, I would remember being caught between elation at sitting across from Fusun and the cool I needed to maintain to win her back, and would feel the same confusion that had beset me. At those meals I would listen respectfully to her husband holding forth on his dreams, on Yesilcam films and Turkish audiences…

There is a record of their visits to the cinemas, in the museum: the ticket stubs and lobby photographs, the posters, advertisements all displayed as records of Turkish film industry vis a vis the cinemas they went to between June to October 1976.

His reflections on love perhaps forms only a part of the narrative. It is a novel about the human world, its philosophy and politics.