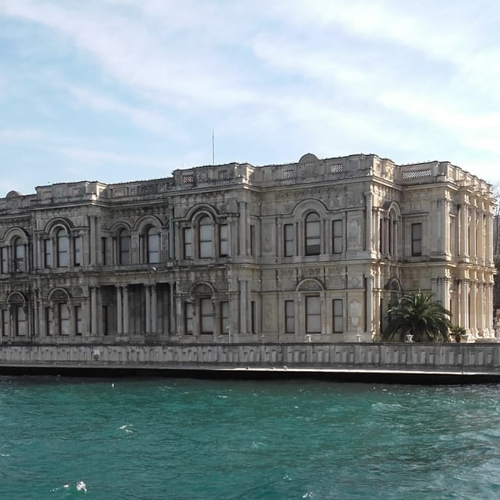 As she took the roses from him, he sensed her discomfort and then the next moment frozen in time he was introduced to her husband, Feridun, an immature boy with a bloated ego.

When Kemal’s engagement to Sybil was finalized Kemal had not imagined he would not see Fusun again. She had quit her job at the shop and the Keskin family moved house after he went looking for her. Aunt Nesibe had very politely turned him away. He had tried sending her letters through a friend but for a year he floundered unable to find himself or his beloved.

Sybil had taken him to stay in one of those Yalis on the banks of the Bosphorous trying to help him recover from his depression. Yalis were waterfront mansions on the Bosphorus. During the reign of the Ottoman Empire rich owners spent their holidays here.  As Kemal says “The Yali added gravity and historical depth to this doomed love of ours; our sorrow and defeat were so great that the vestigial presence of a vanished Ottoman culture could furnish what we had lost as old lovers …”

The Yalis were originally made of wood and as we sailed down the Bosphorous one fine afternoon with a team of academics, I spotted many of these. The Yalis date from the 18th, 19th and 20th century and they carry an uneasy history of the opulent Ottomans.

There was dancing on the boat and everyone was dancing to the beat of Turkish music. But Yalis had cast a gloom on me because it was here Kemal battled with his emotions dark and destructive.  And it was here Kemal swam dangerously close to passing vessels, trying bloat out the pain. For Sybil, Kemal’s love for Fusun is a moment of indiscretion, best forgotten and if he had not been physically ill with this fever called love, she would have willingly entered into a marriage because a broken engagement would sully her honour. The Turkish society was in many ways Eastern when it came to woman.

The upper class held on to the charade of marriage, customs, family honour, symbols of grandeur. He was not ready to give up his status as an upper-class gentleman and would not admit his love for Fusun to Sybil.   As Sybil tells Kemal when she decides to end the engagement “… you’re suffering from some sort of complex about being rich in a poor country…In Europe the rich are refined enough to act as if they are not wealthy…” This I found so relatable as a Malayalee who would starve but not be seen in public in shabby attire.

Kemal loses his father as he is battling with his love for Fusun. Our guide on the boat was pointing out the monuments on the banks of Bosphorous, we were feeding sea gulls sliding through the blue, blindingly white and cacophonic. As he was recounting to us the glories of the Ottoman Empire vis a vis the grand palaces dotting the shores, he mentioned the famous Zincirlikuyu Cemetery where the wealthy and the famous were buried.

“They would die to have their names on expensive tombstones in that exclusive cemetery” he smirked and we laughed at his choice of phrase.

When Fusun disappeared, it had been a time of absences for Kemal:Sybil leaves for Paris shopping with friends, his father is buried and Fusun cannot be traced.

He used to visit Merhamet apartment on the sly. Holding close things that Fusun had handled. Fusun was lost to him, so Kemal tried to find her in things and places that had once known her close. As he says on page 255 of the novel, “these objects that had made her who she was…released their analgesic and soothed my soul” An unwashed teacup from which Fusun had drunk her coffee and her lead pencil adorns one of the cupboards in the museum. I, a stranger from a distant land, felt a terrible ache as I looked at them in the dimly lit museum.

At the Keskin residence, meeting a newly married Fusun, Kemal is in a daze, trying to act normally in the wake of a new reality. Fusun belongs to another. She is a respectably married woman now and he, her distant relative.

“I felt such an ache in my heart that I could think no more and then it was not just for the benefit of the others that I played the part of the relative come to congratulate the young couple: It was for my sake. Though our eyes hardly met during that meal, Fusun caught on at once, and as I carried on acting, she did everything one would expect from a happy young newlywed entertaining a wealthy distant relation come to call in his chauffeur- driven car, teasing her husband, feeding him spoonfuls of fava beans. All this made the eerie silence in my head echo.”

As aunt Nesbit explains later, with no hope of Kemal marrying below his status, the only way to restore their daughter’s honour was to get her married to the only man available who had always been Fusun’s ardent suitor “– for months and months she suffered terribly-oh how she cried…. She stopped eating, and drinking, she wouldn’t go out, she cut herself off from everything. This boy came to see her every day and tried to console her.”

The East’s penchant for family honour is both amusing and frightening. The family as a concept is alarmingly political.