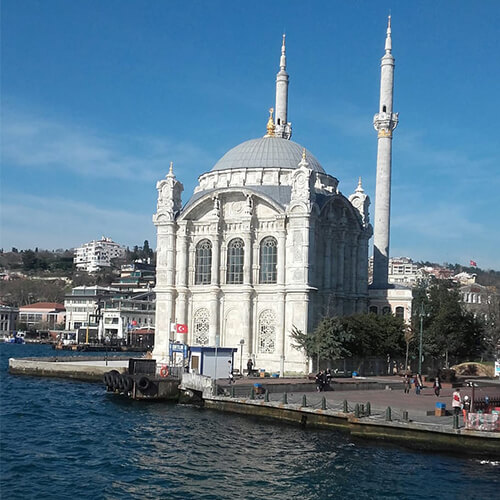 Kemal had almost forgotten the child Fusun who visited with her mother to do sewing at his wealthy family home. They were the poor relatives who his mother chose to be kind to. Years after when he meets her again, she is a young and exquisitely lovely saleswoman woman at the Bags and Accessories shop where his fiancée Sybil had taken fancy to a cream coloured handbag. Kemal enters the shop to buy the bag as a surprise for his fiancée.

As with all great love, it happens without rhyme or reason Kemal cannot think or speak clearly as he recognizes Fusun, he buys the bag in a daze and leaves making mundane conversation, asking vaguely after her parents. There is a chasm of a difference in economic status between them. He is no longer Kemal the rich young businessman but a creature charmed by some strange spell.

When on my walks, I saw these high-end accessories shops I peered in to see if Kemal was in conversation with the graceful Fusun, and as it says in the novel if I could catch Kemal hit by “the force of an immense wave about to crash against the shore”. These strolls through Taksim with half of me inside the book I was carrying and half out in the open, had all the weight of a Time, oppressive and yet light-weight, a Time of great love.

Kemal did not reflect on the consequences of his love for Fusun while he was engaged to another. It is typical of rich upper-class men to keep mistresses in the Turkey of the 70s. Kemal had no sense of his duplicity but Fusun’s spirit was so pure that Kemal yearned to be purged of what his opulent world held.

Just after Kemal’s engagement to Sybil, Fusun moves away and cannot be found. Kemal loses his mind and turns away from the world of hollow materialism that he was once a part of. He is the shadow of a man he was when he was with Fusun.

In Kemal’s words their love making was a gift of perfect happiness, “In that moment, on the afternoon of Monday, May 26, 1975, at about a quarter to three, just as we felt ourselves to be beyond sin and guilt so too did the world seem to have been released from gravity and time”

Fusun’s disappearance breaks Kemal and he ends the charade of his engagement to Sybil. The only thing that is real now is his love for an absent memory.

To me, every building with an upper story looked like Merhamet apartments where Fusun and Kemal frequently met and sometimes I paused to recapture the essence of the moment, the smells and sounds of an evening that embraced  Kemal and Fusun . I too heard the ships on the Bosphorous and the seagulls and the leaves of plane trees in the breeze.

Turkey is a place of many hued humans :Anatolians,Armenians, Greeks. In modern Turkey are the relics of ancient Byzantine empire and the Ottoman empire. The famous city of Constantinople was renamed Istanbul and made the seat of the Ottoman empire. The eclectic culture of Turkey makes it so vibrant and rich. The East and the West meet here, in such terrible beauty. Every phase of transition had been violent and tragic. Kemal Ataturk’s modernization too was wrought with pain and distress, though it was less constricting and catastrophic as other transformations that the region underwent.

People on the streets, kind and exuberant breaking into songs and tapping their feet. I thought I was meeting the characters in the novel as I made their acquaintance.

The very conservative went about in long flowing robes and morose expressions refusing to speak or give directions to an unveiled woman unabashedly excited.  They sat in the dark corners of wayside cafes eyeing you suspicious. Alongside were people free and kind and friendly smiling and remarking uninhibited on some part of your attire that caught their eye.